With every sip or sniff, you can pretty much taste the history of tea. Something about this earthy beverage makes you feel grounded within the world. Perhaps, it’s the laws of matter: all matter in the universe has existed since the beginning of time and tea feels just as old. I imagine early cavemen and women brewing their first pots of tea after recently discovering fire. Drinking the warm beverage during those cold prehistoric nights.

The Emperor of China, Shen Neng, first discovered tea around 2737 B.C. while seeking to find remedies for his ailments. For several hundred years people drank this brew for its medicinal properties. Tea then moved into religious spaces, being used as an offering. During the Han Dynasty (202 B.C. – 220 A.D.), tea plants were scarce and only royalty and upper class people drank it. Around this time, people began to drink tea for taste and not just their health. During the Tang Dynasty (618-907), more tea plants were discovered and tea drinking spread to the lower classes. The government took steps to support the planting of tea plants and the building of tea stores to ensure that everyone could enjoy the beverage. Also during the Tang Dynasty, tea spread to Japan by the Japanese priests who were studying in China at the time.

In Japan, tea is often associated with Zen Buddhism because the priests drank tea to stay alert and meditate. In keeping with ceremonial tradition, Buddhists developed the Japanese Tea Ceremony for sharing tea in a sacred and spiritual manner. Much like the Chinese emperors, the Japanese Emperor Shomu loved tea so much, he took steps to make sure tea became accessible to everyone.

In the 1500s, Sen No Rikkyu incorporated the ideas of simplicity and that each meeting should be special and unique into the tea ceremonies.  The traditional Japanese tea ceremony became more than just drinking tea; it became a spiritual experience that embodies harmony, respect, purity and tranquility.

Tea first arrived in England in the mid 17th century, and the London coffee houses were responsible for introducing the beverage to England. One of the first coffee house merchants to offer tea was Thomas Garway, who owned an establishment in Exchange Alley. He sold both liquid and dry tea to the public as early as 1657. A few years later, Garway created two advertisements about the virtues of tea: “making the body active and lusty” and “preserving perfect health until extreme old age.”

The refreshment quickly became popular in the coffee houses, and by 1700 more than 500 coffee houses sold it. However, the tavern owners and government weren’t too happy about it. The new beverage cut into their liquor sales and thus the tax revenue the government received. By 1750 tea had become the favored drink of Britain’s lower classes.

Much like the Japanese and Chinese, tea became part of a ritual. Even today, there are still certain Tea Etiquette followed when serving traditional afternoon tea and high tea. Having afternoon tea began by royal Britain’s Anna, the Duchess of Bedford. Even though it was typical to eat only breakfast and dinner in Britain, the Duchess started drinking tea and eating light refreshments when she started to feel hungry in the afternoons. She began inviting friends to join her and soon the afternoon tea tradition was born. Afternoon tea (or low tea) is usually served between 3 and 5 p.m. and is very different from high tea, during which a more hearty meal was eaten at the end of a workday. This usually happened around 5:30 or 6 p.m. for the working classes.

Like England, tea first came to North America in the 17th century through what was then the Dutch colony of New Amsterdam (New York). When it was acquired by the British many of the tea drinking customs common in England were passed on. As tea drinking spread, special water pumps were installed in natural springs.  With water now readily available for making tea, places called “Tea Gardens” became popular at these tea springs. To symbolized wealth and elite social status, cities like Boston and Philadelphia adopted the English style of tea drinking and their use of fancy silver and porcelain tea products.

Tea trade between the colonies and England were centered in New York, Boston, and Philadelphia. Tea was heavily taxed due to the East India Company’s monopoly on tea imports. Colonists would often try to smuggle tea in. With more taxes being imposed, including, the Act of Parliament in 1767, American ports began refusing shipments of dutiable goods, including teas, causing ships to turn around with their cargo in some cases.  The Tea Act of 1773, which was intended to boost profits for the East India Company by bypassing local tea merchants and selling tea directly to the colonists, was the final straw that triggered The Boston Tea Party.

On Dec. 16, 1773, a group of protesters disguised as Mohawk Indians, along with the Sons of Liberty got the idea to dump the tea into Boston Harbor. The protestors and a large crowd of Bostonians, boarded the British East India Company ships, the Eleanor, Dartmouth and Beaver.  In  three hours, they dumped 342 chests of tea into the Boston Harbor. This event lead to the American Revolution.

Two major breakthrough’s in tea happened in the early 1900s. First, by Richard Blechynden, who in 1904, at America’s first World’s Fair, had the idea to serve his brewed tea on ice since drinking hot tea during a summer heat wave is essentially a recipe for a heat stroke. The second was by Thomas Sullivan of New York, who in 1908 is credited for inventing the tea bag. This tea merchant packaged loose teas in hand-sewn silk muslin bags to be shipped around the world. But one day while hile delivering the bags of tea to local restaurants, he noticed they were brewing the tea while still in the bags. This sparked his idea to market the bags as a new, convenient and less messy way of preparing tea.

Craft: The Different Types of Tea

Early teas were processed into cakes, similar to the modern pu-erh teas. They were dried, steamed or processed in some way. During the Song Dynasty (960 – 1279 A.D.), some teas were ground and whipped into a frothy beverage like our current day matcha.  Thankfully, not long after this the Chinese began experimenting with loose-leaf teas.

It wasn’t until the 12th century when tea was divided based on the types of processing used to make them. In the Ming Dynasty (1368-1644 A.D.), foreign trade was increasing, so tea merchants needed a beverage that would last longer. The Chinese discovered fermenting and began crafting oolong and black teas that would store longer. At this point they also started experimenting with scenting and flavoring the teas in order to make the essence last.

The crafting of different types of teas continued to change over time. We now divide tea into four types: white teas, green tea, oolong teas (semi-fermented), and black teas (fermented). And there are subdivisions of these, such as pu-erh teas, which are double-fermented.

From its origins in China to its world notoriety, tea really has been through it all. It has  seen war and peace — which is truly something to drink to.

Tell us your favorite go to teas to sip on. 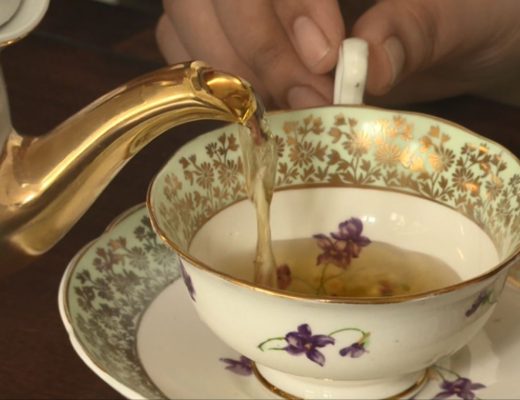 We might be biased, but the smell and taste of our

“While there is tea, there is hope.” – Arthu

Monday mornings with tea are the only Monday's we

The tea fact of the day! Did you know that ‘chai

Here's a fun fact for your Friday! Your tea may ta

A cup of tea is a solution for everything.⁠ ⁠

Take time for yourself today. Even if its only 5 m

Have you tried our Citrus Blossom tea? It's a beau

Sunday's are for relaxing. How are you relaxing to

What’s better than tea? A cup of tea and pastry

Fact of the day! Did you know this?! #teaoftheda

Is it just us or does making your tea aestheticall

Happy Sunday! We hope your Sunday is filled with l