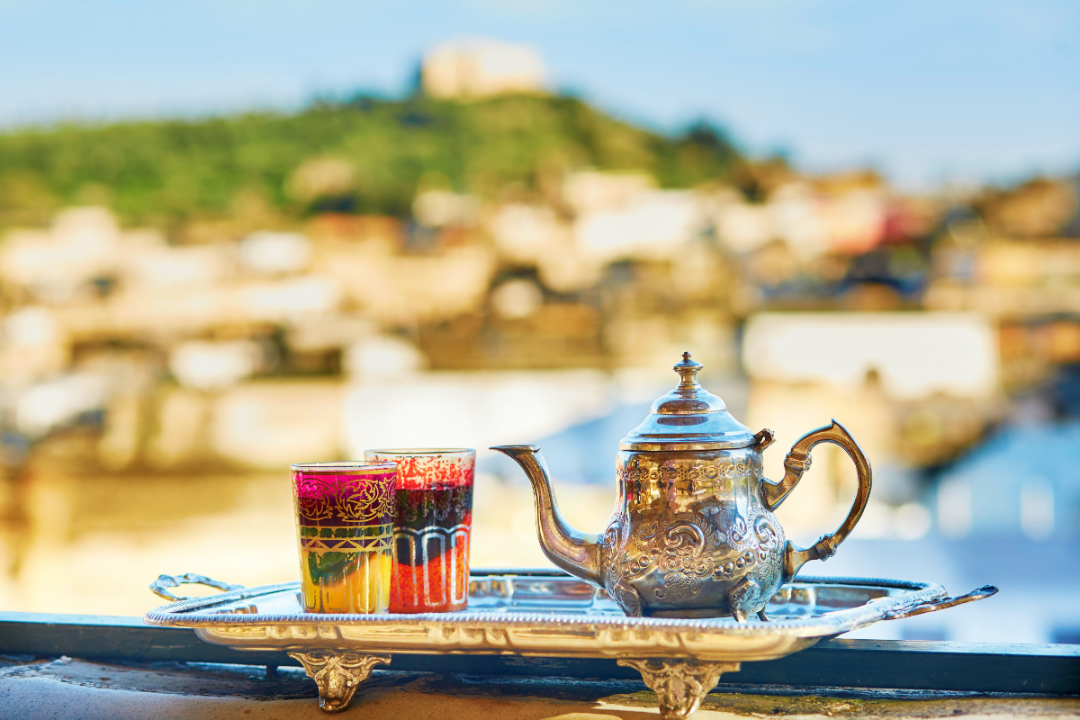 There are many different tales that people believe when it comes to the birth of tea in Morocco. Some historians believe that the British Queen Victoria personally sent over tea to the Queen of Morocco, while others believe it was introduced by the Arabs when they first arrived in Morocco. While the history of how tea arrived in Morocco has been a debated topic by historians for years, it is important to understand the culture and art of tea as it is known in Moroccan culture. The art of tea drinking has been a part of the Moroccan culture for centuries and there are many different traditions and tales about Moroccan tea culture. It holds a symbolic value in Morocco and the state has since become one of the largest tea importers in the world.

As trade increased throughout Morocco in the late 1800s, tea spread throughout the country. Tea has since become part of the Moroccan ritual and a social rite in the state. People first started drinking tea in Morocco because they were not allowed to drink alcohol. This is why Moroccan tea can sometimes be referred to as the berber of whiskey because it served as a placeholder for the alcohol they were not allowed to consume. Muslims were forbidden from consuming alcohol for religious purposes, so they looked to Moroccan tea as a logical alternative. Moroccans refer to tea is Attay. It is a sacred drink that offers a sense of welcoming and generosity to anyone passing through or visiting.

Although tea is not grown in Morocco, it is a huge part of their culture and everyday life. The most famous Moroccan tea is Moroccan Mint Tea. Moroccan Mint Tea or Maghrebi mint tea is a symbol of hospitality and generosity and is often consumed when meeting with family, friends, acquaintances, and more. It is green tea prepared with mint leaves, sugar, and sometimes other herbs. It is a tea that is meant to be prepared in front of guests and can be consumed at any time of the day. It is usually prepared on a large tray with a teapot full of hot water, green tea leaves, herbs, mint leaves, and sugar. The teapot where you will often find Moroccan mint tea is called a Sinia tea tray. Typically, they are silver and have matching silver sets to accompany them. The portions are usually served in a large pot which means you never consume just one glass. This is another example of hospitality in the Moroccan tea culture.

Moroccan tea is mixed by pouring the infusion from teapot to teapot and allowing it to cool down in the process. The secret to making the best Moroccan Mint Tea lies in the amount of ingredients you put in and the time in which the ingredients infuse together. The sweeter the tea, the more value you are as a guest to the host serving your tea. Another fact that can be associated with the importance of a guest is the height at which the host pours the tea from the teapot. The higher the teapot is, the important you are as a guest. This ritual is also scientific, as it helps in oxygenating the tea and facilitate digestion. The large portions are meant to serve as an inviting, welcoming factor. It is often prepared by a male, typically the head of the family, whereas the food is prepared by the women in the family. Sipping loudly is a symbol of Western etiquette as it shows a sign of appreciation to the host or preparer of the tea. If you find yourself in a Moroccan marketplace, vendors may offer you tea to invite you in and try to sell their product to you. Moroccan tea traditions are not only popular in Morocco, but in the surrounding North African states as well.

Some foods that are typically paired with Moroccan tea include traditional dishes such as couscous or B’sara (bean soup). The sky is the limit here but don’t be surprised to find a table laden with loads of carbohydrates. Pastries and breads make up a bulk of the typical sweets at the table when enjoying Moroccan Tea. Msemmen is a favorite snack for kids and adults alike. They’re usually offered at breakfast or in the late afternoon for snacks. They can be served sweet with honey and butter or made savory and stuffed with onions and spices. Another dish you are likely to see is a plate of Moroccan cookies better known as Ghoriba Bahla. These delicate cookies are shortbread with almonds and sesame seeds.

Brew your own serving of Moroccan Mint Tea using our Gunpowder Green Tea. Moroccan Mint Tea is easy to make and relies heavily on timing. Start by gathering the ingredients: gunpowder green tea, fresh mint leaves, sugar, and water. Gunpowder Green Tea is a Chinese-style tea that is rolled into small balls to resemble gunpowder. In Morocco, it is directly imported from China. Start by boiling your water in a kettle and adding the gunpowder green tea leaves. Cover the leaves and allow the water to steep. After straining and disregarding the leaves, add fresh mint and sugar to the pot. Allow the combination to steep for just over 5 minutes. To achieve the perfect infusion, pour the pot back and forth between two containers and then serve on a Sinia Tea set.

Moroccan tea is a sign of appreciation that should be accepted upon offering. It is a sign of hospitality that is meant to welcome guests and serve as an act of generosity and kindness. It is a long and leisurely experience that is meant to be enjoyed by all. Its cultural importance cannot be overstated. Whether you want to enjoy its role in local society or to experience Moroccan Mint Tea benefits, you’re in for a treat.